Chicory or bulb turnips, which is the better feed for lactating dairy cows? A recent dairy grazing study has delivered insights and information around feeding summer turnips to cows.

Puna II chicory (16 ha), Barkant® turnip and Cleancrop™ turnips (2.3 ha in total; 1.5 ha Barkant and 0.8 ha Cleancrop™ turnips) were established during spring 2019. Starting early December 2019, all cows grazed chicory before being split into two study herds. From mid-January 2020, 250 cows continued grazing chicory and 150 cows transitioned to turnips. Cows remained on each crop until late February 2020, at which time turnip cows returned to chicory. All cows remained on chicory until late March, when chicory was sprayed out for regrassing.

After allowing for wastage during grazing, cows consumed four kgDM/cow/day of either chicory or turnips. The remainder of the diet was the same for each herd and included maize silage, grass silage, palm kernel extract (PKE), pasture and waste onions and potatoes.

Herds were milked once per day. Daily bulk milk volume, milk protein percentage, milk fat percentage, lactose and somatic cell counts (SCC), fat evaluation index (FEI) and milk fatty acids were measured for each herd – milk from each herd was collected into separate vats. Weekly herd testing provided milk volume and milk component information for individual cows. A proportion of cows from each herd were body condition scored at the start and end of the study.

Takehomes: Chicory is useful when a lower daily amount of summer crop is required over a longer period. In contrast, turnips are useful to ‘feedbank’ crop accumulated before late December, pushing feed ahead to be eaten for a shorter period during mid to late summer. During drought years, slow chicory regrowth may not adequately match feed demand.

Anecdotal evidence is that turnip-fed cows may lose (or not gain) body condition when consuming turnips. Findings from this grazing study did not support this observation. After six weeks on summer crops, both herds gained an average of 0.1 BCS with little difference noted between herds. The careful transition of cows onto turnips, and ongoing feeding of maize silage and PKE to turnip-fed cows prevented the loss of BCS sometimes seen in cows consuming turnips-based diets. 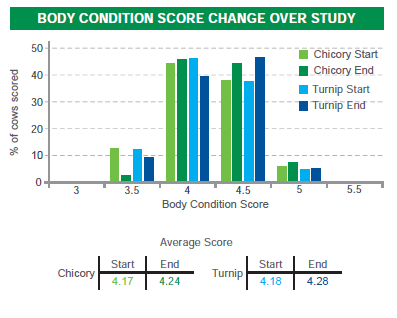 Based on bulk vat data and herd test results, milksolids (MS) production was similar for cows consuming the same allocation of either chicory or turnips. This result agrees with outcomes from 1990’s research reported by DRC (now DairyNZ). Twin cows fed the same amount of either turnips or chicory during both summer and autumn produced the same amount of MS and had similar gMS/kgDM responses to each crop type.1

The concentration of milk protein, milk fat and milk lactose was similar for milk from turnip and chicory-fed cows. These results differ from Waugh et al. (1998) who reported a lower milk fat percentage for turnip-fed cows. Neither herd ‘graded’ based on FEI results, despite all cows consuming up to 2.5 kgDM of PKE/cow/day. Milk FEI may increase for turnip-fed cows due to the medium-chain fatty acids present in turnip bulbs and/or from mild rumen acidosis when cows first transition onto turnips.

Takehomes: Cows that consume the same amounts of chicory and turnips have similar MS responses. Decisions around which crop to plant should reflect agronomic and feed budget decisions (which crop will yield the most DM to best match herd demand when pasture supply is limiting).

While FEI was slightly higher for bulk milk from turnip-fed cows, the FEI did not reach cutpoints at which penalties apply. These results show turnips and PKE can be successfully fed together, but bulk milk FEI should be carefully monitored.

Many thanks to Fonterra for the assistance with the collection, processing and handling of bulk milk samples and data. 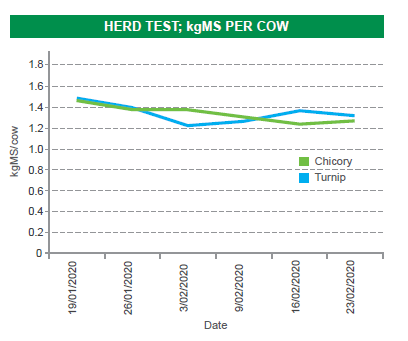