Not replacing milk liners is like driving on old bald tyres

It is risky to drive around in a vehicle with bald tyres. The same analogy can be made for milk liners. Given milking liners are the direct link between the plant and the cow, persisting with worn-out liners is a recipe for decreased milk production and quality, and for lowered animal health status.

The coming off-season is the perfect time to replace liners and enables a herd to get off to the best possible start when the new season begins.

The New Zealand industry standard is that milking liners should be changed after 2,500 milkings.

It's possible that the average New Zealand dairy farmer doesn't change their liners until 4,000 or even 4,500 milkings according to Peter Lindsay, Skellerup Dairy Technical Specialist in the South Island. On the other hand, he does report some farmers religiously change their liners after 2,500 millkings, and see the benefits of doing so.

Christchurch-based Skellerup is one of the largest manufacturers of dairy rubberware, all made in their Canterbury factory. They know that changing liners outside the industry standard does a disservice to your herd, as the properties of the rubber will no longer be as efficient.

"One of the key things the liner does is it massages the cow's teat, which has blood valves in it," Peter says. "And the blood needs to keep being pumped through these valves, otherwise there can be a risk of oedema. You get teat swelling which makes milking longer, as well as potential teat damage problems."

If a liner has not been changed by 3,500 milkings it's operating at approximately 10% efficiency, something Peter can't stress enough in terms of efficiency and quality of milk out.

On top of this, ill-fitting liners can cause teat damage while the incorrect liner can cause cup slip.

"It's very important to get the right liner for your herd," Peter says.

For reference as to when key pieces of rubberware should be replaced, look to your Food Safety Practices and Procedures maintenance schedule, completed at the start of the season either in the Dairy Diary or online.

Farm Source Regional Food Safety and Assurance Manager Grant Rudman acknowledges that those who've moved farm for the new season may not have the history of the plant's rubberware. In this instance, he says: "If in doubt, switch it out."

"The milk you send to the factory has your name on it, so we do really recommend starting the season with your best foot forward and making sure your rubberware is performing 100%."

Tune in to the full session of Farm Source Seasonal Focus: Renewing Rubberware at nzfarmsource.co.nz/milkquality. 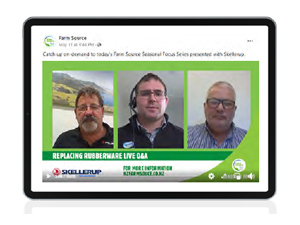 This season we're talking milk quality with our internal experts and vendor partners - tune in to our next session on Wednesday 15th June where Farm Source Milk Programme Lead Daniel Heine and FIL National Sales Manager Colin May will discuss teat hygiene, common misconceptions about somatic cell count and how to set your herd up for success this season.

Register for free at nzfarmsource.co.nz/milkquality.

Independent studies show farmers could lose up to 5% of production through not changing milk liners regularly.

A rise in somatic cell count (SCC) is a contributor to this, with every 100,000 rise in count causing a 2.1% production loss.

Peter Lindsay, Skellerup Dairy Technical Specialist in the South Island says a 5% calculation across a herd can be quite daunting, so he prefers to illustrate the potential loss (and therefore benefits) of a half-a-percent gain through timely liner replacement.

His example is of 500 cows milked twice a day through a 36-bale shed. Instead of changing liners three times a season, they are changed twice, accumulating 4,000 milkings.

The cost of a third set of liners would be about $900.

Five hundred cows, at 400 kilograms (kg) of milksolids (MS) per cow with a $9/kgMS payout is about $1.8 million in total revenue. Half a percent gain (i.e. not lost production) equates to $9,000. The $900 liner cost makes for a pretty good return in the books.

"It's really a no brainer," Peter says.

At the same time, this doesn't include benefits in improved milk quality, less time in the shed and improved animal health.

He emphasises that the off-season is the perfect time to replace milk liners, as well as other rubberware in the dairy shed.

Ensuring your system is right now easily pays off in the long run.