With a growing interest from customers and consumers around animal care, Fonterra's role in supporting its farmers to meet expectations is also growing.

"If customers and consumers don't like the way something is made, they'll look for it somewhere else," explains Farm Source Senior Veterinary Manager Mike Shallcrass.

That point is well understood in New Zealand and Mike is quick to compliment our farmers for their high standards of animal care. Ensuring customers and consumers both local and international understand New Zealand farming systems is a big part of Mike's job.

"It may be once a month that a big customer sends a survey around how our product is produced, and I will have to answer the animal care aspect, for example 'what percentage of the animals in your supply chain have X disease?'," Mike says.

Alongside those questions come requirements with each customer having its own needs for how animals should be cared for, to align with the standard of care they are selling to their consumers.

Sometimes those requirements relate to painful husbandry procedures. There is a demand around the world for both private and public welfare standards to prohibit or reduce the impact of painful procedures. Animal care standards can be used as non-tariff trade barriers, and it's important that New Zealand is aware of shifting expectations internationally in order to maintain market access options.

"Tail docking is a good example. Societal expectations change and the law needs to adapt in response, that's why tail docking of all species, not just cattle, became illegal several years ago," Mike explains.

"Taking steps to reduce the need for painful procedures helps to set you up to meet society's and customers' expectations in the future."

While Mike and his team aren't responsible for regulating animal welfare, his understanding of consumer and customer expectations is used to influence policy at an industry and co-operative level.

It's that satisfaction in being able to lead change that attracted him to the job two and a half years ago after 11 years in clinical dairy practice.

"One of the things I was told when I started this job is that a lot of what we do is behind the scenes. I was interested in the idea that I could help all the cows in New Zealand - not just one at a time which is what you do in clinical practice."

Day to day you'll find Mike at his desk in Hamilton, however, he does still go on-farm occasionally.

In these cases, it may be to do a welfare check and work with a farmer to make sure they are taking the correct steps to comply with regulations. Mike appreciates farmers lead busy lives and it can be hard to forever be up to date with the latest regulations, so he likes to take a one-on-one approach to education.

"In the Co-op, we try to make things as easy for our farmers as we can while still meeting customer expectations. With that, we need to take the time to explain to farmers why the regulations are in place so it's not just a rule for the sake of it."

And for farmers who aren't sure of what they should be doing, Mike's advice is to seek help sooner rather than later.

Giving the example of the Mastitis Support Programme he oversees, Mike says there's a whole network of expertise to be tapped into to support the farmers in managing animal welfare while maintaining milk quality.

However, he is again quick to point out that New Zealand's farmers have good practices.

An example he gives is around pasture grazing. There are some places in the world where 'grass-fed' means the animals live in a barn and some cut grass is brought to them but a lot of their diet is grain, whereas in New Zealand, animals are grazed outside. A consumer might not know the difference, but there can be a big difference for the welfare of the animals.

New Zealand is also ahead of the game when it comes to group housing for calves.

Overseas, calves may be housed in individual hutches to prevent the spread of respiratory diseases, however, we don't have those diseases in New Zealand and calves can be housed together.

"When I go to international calf rearing meetings, they see it as great welfare to move from one calf in a hutch to two calves in a pen - but group housing is just the norm here," Mike explains. "There's a whole lot of things we do by default here that are so good but they're not always appreciated because they're just what we do."

So, when Mike is asking a farmer about their on-farm practices, he sees it as collecting the stories to help explain New Zealand's high standards of animal care.

However, despite knowing we have high standards, there is no internationally agreed way of measuring how well animals are cared for. In place of that, Mike says farmers should always be asking themselves: "How would you prove your animals are well cared for?" 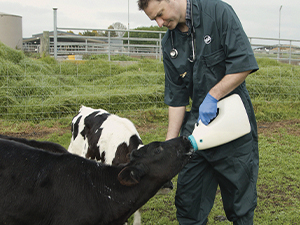 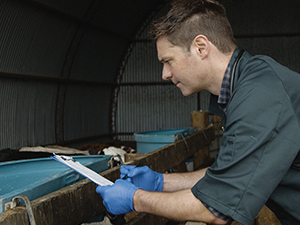