What's the problem? Regional councils are placing restrictions on the amount of nitrate leached from farmland.

The aim of these restrictions is to improve the quality of surface water which includes lakes and rivers. Nitrate is not the only aspect of water quality which needs attention, but it is probably the most difficult because riparian planting and the fencing off of waterways reduces phosphate, sediment and E.coli pollution, but is virtually ineffective against nitrate leaching.

It's been well documented that the predominant source of nitrate leaching out of farmland is from the urine patch – an area created when urine with high nitrogen (N) concentration is deposited on the soil. The concentration of N is too high for the surrounding pasture plants to take up and ultimately nitrate-nitrogen is lost below the root zone and eventually into waterways.

Ecotain environmental plantain is a natural technology which reduces nitrate leaching from the urine patch using four independent mechanisms. This issue recaps how two of these functions (DILUTE and REDUCE) work. Essentially, you can think of them as the animal-centric mechanisms.

To explain how the animal-centric mechanisms function let's recap the N cycle, shown below. About 50 percent of the N ingested by the animal is excreted in urine and deposited on the soil surface in a urine patch. Soil microbes convert the mainly ammonium-nitrogen (non-leachable) into nitrate-nitrogen which is leachable.

Nitrate not taken up by the plant is leached below the root zone when water moves through the profile. Generally, the higher the concentration in the urine patch, the more N is leached. 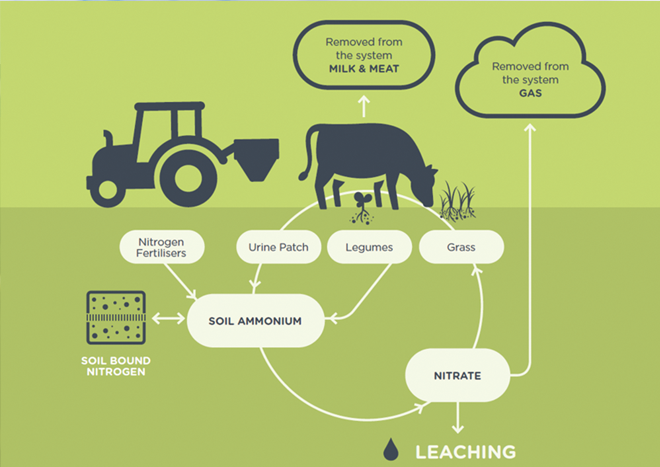 Reducing the amount of N and/or concentration of N in the urine will ultimately reduce N leaching because the plants will leave less residual N in the urine patch.

“Dilution is a solution to pollution.”

Reducing the concentration of N in the urine patch has a large effect on the amount of nitrate leached. That’s because the pasture plants within the urine patch are capable of taking up a greater proportion of the total N loading and therefore the soil residual N is lower.

Dilution of the N in urine is achieved through two processes. Firstly, urine volumes of animals grazing Ecotain are higher than perennial ryegrass, because animals grazing Ecotain effectively eat more water. The following table shows the amount of water eaten in feeds of different drymatter percentages. The differences a few percentage points in drymatter makes to the total amount of water consumed is considerable. Urine volume is ultimately the difference between water consumed and that lost through other routes (e.g. faeces, skin and respiration), so the greater the intake of water, the higher the urine volume (all else being equal). 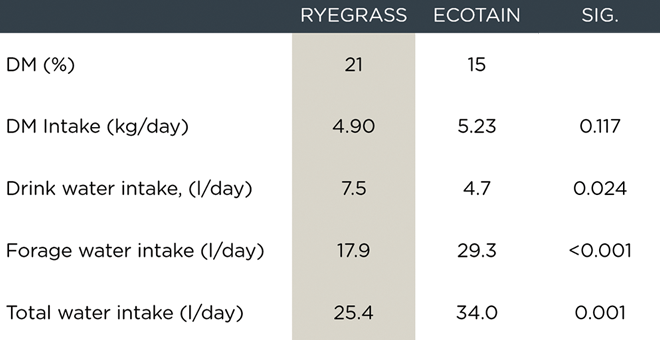 A majority of this work has been done on full diets of Ecotain but there is an emerging thought that Ecotain may only need to make up 20-30 percent of an animal’s diet in order that significant reductions in urinary N concentration are achieved.

About 50 percent of the N consumed by the grazing animal is excreted in urine. Reducing the amount of N consumed (using low N diets such as fodder beet for example) will ultimately reduce N loading in the urine patch. In many situations however, reducing N intake is not easily achieved, especially in pasture-based systems in autumn and spring. It stands to reason that if we cannot reduce N intake, then reducing the proportion of dietary N excreted in urine could help reduce the loading of N in the urine patch.

Indoor studies, where feed intake and urine can be accurately measured provide some evidence that animals consuming Ecotain excrete less of their dietary N into urine. There are probably two common questions around this function.

Firstly, if N is not being excreted into urine, where does it go? There is evidence that more is present in dung, which does not present the same leaching risk as urine, and more of it is found in milk, not necessarily as milk urea but possibly as more milk protein.

The second question often asked is how does this change in partitioning happen? We don’t fully understand the mechanism of changes in N partitioning, but Massey University researchers have demonstrated Ecotain can affect the microbes of the rumen, reducing rumen ammonia and thus reducing the amount of N cleared in urine.

Regardless of what causes this, reducing the proportion of dietary N being excreted in urine aids in the reduction of nitrate leaching through its effect on urine patch load.

Check out next month's issue of enrich for more on the DELAY and RESTRICT functions of Ecotain.