Brad Quinlan joined the Canterbury Farm Source team in May this year, but he was already a familiar face to many in the Farm Source community. In fact that was part of the reason he took the job.

"It’s a good fit for me with the previous experience I have. I have worked with the Farm Source stores in my previous roles and found them extremely easy to deal with and they always have a very professional manner," says Brad, who works out of the Leeston and Rakaia stores.

"I’ve never worked for a co-op before and I really like it. You’re working for the benefit of the farmers and trying to give them the best result possible," he says.

Brad looks after about 120 farmers in the area and says there is a real feeling of positivity amongst his customers. "Grass growth is good and calving’s going well so everyone’s pretty happy really. Milk production is also up which is great."

Brad is a born-and-bred Cantabrian - he grew up in Ashburton and began his career as a wool buyer for Woodhams Woolstore. He then worked for six years as a sales rep for Seales Winslow in the nutrition category. There, he was responsible for sales of pelletised starch-based products and mineral supplements in the lower South Island. Brad’s nutrition nous developed further at Five Star Beef (ANZCO Foods) where he was feed procurement manager and responsible for purchasing all feed commodities for their intensive feedlot.

Brad has enjoyed the chance to share his animal nutrition experience and expertise with farmers and colleagues alike.

"Getting through calving and calf rearing has been good for putting my knowledge to use to help our farmers – whether its calf feed, nutrition or dairy feed"

During his time at Five Star Beef, Brad also managed a substantial area of maize from planting to harvest, including collating and inputting relevant data and effluent management. Those agronomy skills came in handy in 2014 when Brad worked at Creeside Farm at Barnhill, an arable farm owned by his wife’s parents. The farm grows a range of crops including wheat, barley, ryegrass, clover, processed peas and seed potatoes and his time there included working on the lamb fattening side of the operation.

At the moment, it’s Brad’s knowledge in paddock prep, winter feed varieties and pasture management being called on as farmers gear up for regrassing.

"We’re working out requirements for supplementary feed. Whether it’s maize or other winter feed options – fodder beet, kale or oats – we’re planning what the farmer’s needs are and working out what’s going to best suit their system."

Brad says last summer was pretty good thanks to rain late in the season and, after three summers of drought, it was a reminder to farmers in the area of just how quickly the situation can change.

Brad described winter as "probably the best we’ve ever had weather-wise" and he’s counting on a great spring too.

In his spare time Brad enjoys gardening, rugby and spending time with his wife Jacqui and their two young boys. 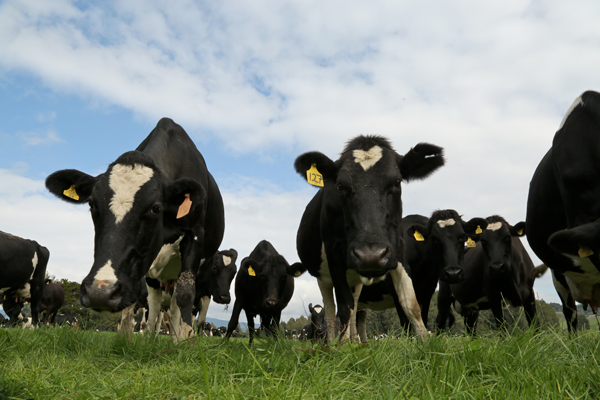